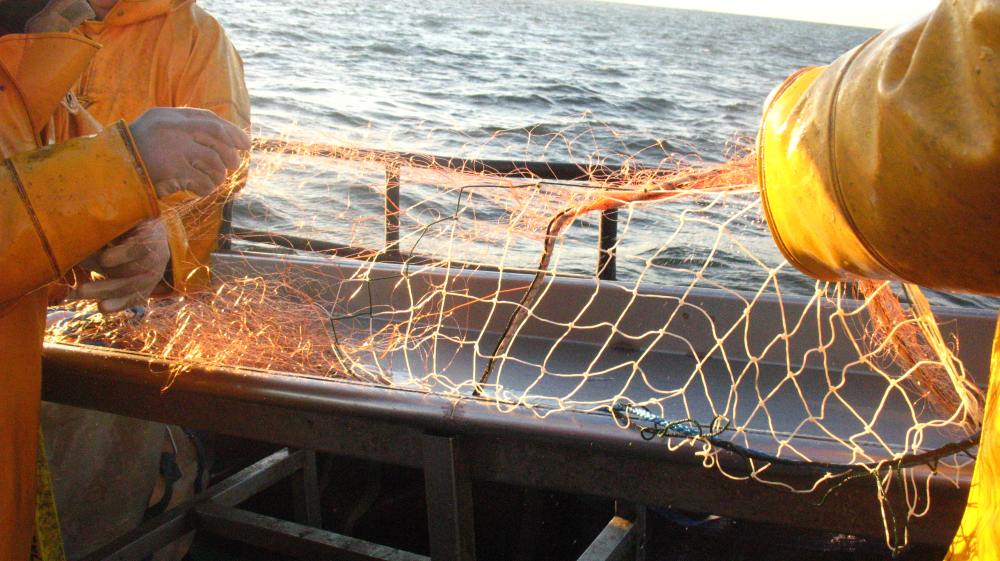 As summer arrived this year many diving seabirds migrated from the Baltic Sea to breeding grounds in Russian Siberia. But this is just a short period of their life, as they move to their breeding grounds for 4-5 months, and the rest of the year they spend on wintering ground.

The 2014/2015 winter period in the Baltic region was mild, and lots of diving birds stayed further north than usual, where ice-free water was present throughout the entire season. Our colleague Vytautas Eigirdas, in the Lithuanian Ornithological Society found that there were still significant number of wintering Velvet Scoters in the Lithuanian Baltic Sea along the coast of the Curonian Spit. Counts found at least 3500 of this species, which is currently considered endangered globally. During cold winters in the same area you can find more than 5000 wintering Velvet Scoters.

During the 2014/2015 winter we were able to assess the number of these diving birds caught in fishing nets in Lithuania. This is the first time in a number of years that we have been able to do this work. Together with project partners – the coastal fisherman- we collected data on seabird bycatch. Looking at the data collected from this preliminary work, 53 birds were recorded as caught in nets, the majority being Velvet Scoters – 45%, Long-tailed ducks were the second most regularly caught species – 39.6%, and there was also small numbers of Red-throated divers and Common guillemots caught.

For the most part, Velvet Scoters were caught near the Curonian Spit, in depths of 12-30 meters where the sea floor has a sandy bottom. These birds spend the winter in this type of habitat foraging on clams which inhabit the sandy bottom seafloor. In autumn this place is popular for the Cod fishery, which use 50-55mm mesh size nets. As fishermen use nets with big mesh sizes, this could affect the number of birds caught. Long-tailed ducks were mostly was caught near Palanga in water depths of 5-7 meters. In early spring time this region is popular with fishermen catching Smelt, and is also the stopover site for Long-tailed ducks. To catch smelts the fishermen use 18-22mm mesh size nets.

At this stage of our work, the data collected has been different compared to those collected 10-15 years ago, as the most regularly caught species is now Velvet Scoter, which was previously found to be the second most regularly caught species. Previously it was estimated that 2/3 of bycatch was from Long-tailed ducks, which no appears to no longer be the case. These changes could be related to changes of wintering sea ducks number in Baltics, or perhaps to the degradation of the feeding ground habitat. Now large numbers of Long-tailed ducks are common in the Lithuanian coast only during the spring migration. This demonstrates that knowing the key sites and timing of the birds movements and the fishing patterns and bycatch susceptibility in the Lithuanian Baltic sea will help us in trying to change the fishing gears to reduce seabird bycatch in nets.