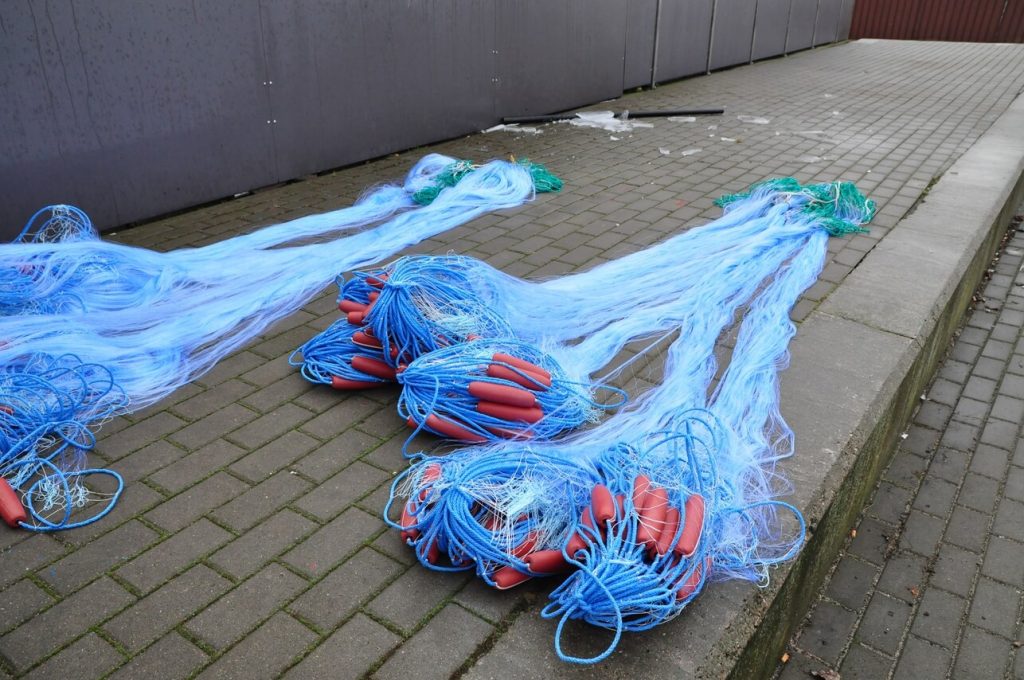 For the first time in EU waters, we want to test net lighting in Polish gillnet fisheries to minimise seabird bycatch, thanks to a new project coordinated by BirdLife International and funded by the European Commission to specifically look at gillnet bycatch mitigation. As part of BirdLife’s existing work in the Baltic (Lithuania), testing of net panels is already being carried out, so it only made sense to examine the efficacy of an alternate measure in Poland. While it was relatively easy to come up with a solution, actually implementing it turned out to be a challenge!

At the beginning of December,  we decided together with BirdLife International that due to light conditions prevailing in the winter season in the the South Baltic, net lighting instead of the high contrast panels (see below) already tested in Lithuania should be more effective in protecting birds against their accidental bycatch in gillnets.

Images above: On the left, fish luring lights used in the net lighting measures in Poland. On the right, high contrast panel being tried out in Lithuania.

The effectiveness of lamps produced by the Korean company CENTRO had already been documented to reduce seabird bycatch in the Southern Pacific. So why would the same measures not be as effective in the Baltic? Once the decision was taken, we thought it’d be easy enough to start trying out the idea.

It turned out CENTRO lamps were not available either in Europe or at the manufacturer in Korea in time to start our project in the present season. In the end, we only managed to buy two pieces of CENTRO lights so we had to look for alternatives. We successfully found appropriate lights and after some trouble we managed to buy 350 lamps of Korean production type YML-1000 (photo below) of a very similar design and parameters with respect to the original CENTRO product.

Once we had the lamps in our hands, we came across another issue. The proposed lamps had been developed for longline or angler catches of swordfish, so adapting them for our project needs was not so obvious. Luckily, we eventually got around that issue too!

The lamps reached the NMFRI in mid-February and they were immediately installed on previously prepared net sets by owners of two boats with whom the NMFRI had earlier signed relevant agreements on cooperation within the project.

After negotiations with fishermen, they considered that they could try with automatic lamps which should not significantly slow down the process of fishing and would hopefully be effective in minimizing seabird bycatch.

The lamps have been installed by each fisher on two sets of nets with a length of approx. 300 m. Two identical net sets have been left with no lights as control sets. The next step will be to examine any operational issues with the lights so we can eventually deploy them in big numbers.

Now that we are ready to set sail, we are eager to share our next steps with you!